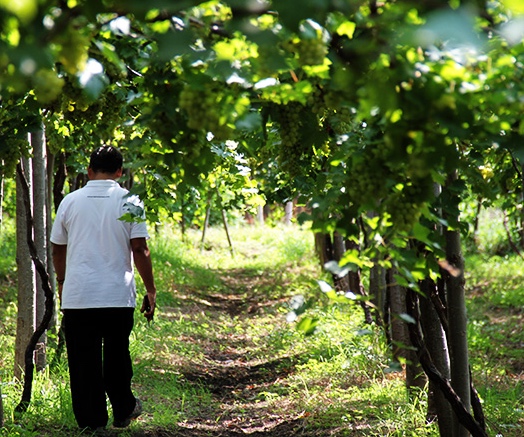 These are wines produced in the most unlikely places, against enormous odds, by people of limitless enthusiasm and resolve.

The ‘newness’ of these wines resides in their relative novelty and proven resilience against every sort of geographic, climatic and cultural obstacle.

In recent years, members of this club have been drawn from countries once considered too cold for the planting and production of commercial quantity (and quality) wine grapes.

Although vines, for example, have been grown in the UK for thousands of years, wine production had all but died out by the beginning of the 20th-century. Today, English sparkling wines are winning fans throughout Europe.

And then there’s Denmark, Sweden, Norway, Canada and Russia, among others. Neither old world nor new world (as these terms are commonly understood) – and all with a long history of grape production – these once cold-climate countries are gaining reputations for wines of complexity and finesse.

But what about those new, new world wines from countries previously considered too hot for the planting and production of wine?

These, too, belong in my third category – wines from such unlikely destinations as India, Thailand, Vietnam and Taiwan.

I have recently returned from a one-week holiday to Bali, Indonesia – a tropical destination, eight degrees south of the equator. The island rests in a zone of high humidity and unrelenting heat.

In such conditions, I rarely thought of wine. Instead, I lay on the beach, fresh from the surf, and washed the sea salt from my lips with bottles of ice-cold beer.

In any case, the local tax on imported wines is so prohibitively high as to make the purchase of wine a kamikaze act: $80, minimum, for a bottle of bog-standard Australian wine. I stuck to beer at $3 a bottle and cocktails at $5 a pop.

And yet, though climate and culture mitigate against it, Bali grows grapes (and has done for a century) and its few commercial vineyards are bottling wines and finding markets throughout the archipelago.

Bali’s first and arguably best-known winery is Hatten Wines. Established in 1994, Hatten grow their grapes in Bali’s north on a high pergola trellis, attached to small trees that are regularly pruned.

The grapes hang like chandeliers, forming long shaded archways that protect against diseases and the ruinous effects of humidity and excess sunlight.

In such a tropical environment, canopy management is a full-time, labour-intensive business; workers often live in houses built among the pergolas.

The grapes are harvested from evergreen vines that produce grapes continuously in 120-day cycles. There are no cooler months; wine is produced all year long.

Varieties grown in Bali include the local Probolinggo Biru and Belgia grapes, as well as the French table grape Alphonse-Lavallée.

From these, Hatten produce a range of red and white wines – sparkling, still and fortified – and a popular rosé.

I sampled two Hatten wines: the ‘AGA’, a white wine with a musky nose and citrus, grapefruit and ripe peach flavours; and the rosé, a wine with intense, red-berry notes and strawberry, rose water and orange rind flavours.

I liked them both.

At a bookshop at the airport on my way home to Australia, I asked for a book on Balinese wine and was met with a look of genuine surprise: “No, sir, no such thing…”

Not yet, perhaps, but one day. Balinese wine deserves a book – one that tells the story of a fledgling local industry, established and sustained in a hot and humid, even hostile climate, by devoted men and women with a passion for wine.

Show me that book and I’ll buy it.